Maeil Christmas (매일크리스마스) or in English ‘Everyday Christmas’ is a relatively new restaurant in Hwajeong. As the name suggests it is Christmas themed but only in decor; the food and drinks have nothing to do with Christmas.

It’s located down the main pedestrian area of Hwajeong not far from the station. It’s up on the second floor on the left as you walk away from the station. There are signs outside on the side of the building but there are a lot of different ones so it can be hard to spot among the crowd.

The restaurant itself is a decent size with over a dozen tables. The decor is tasteful Christmas rather than tacky and we felt it could have been amped up a bit but that may have just been because we visited during the festive season. They have one Christmas tree and a lovely reindeer and sleigh light decoration in the middle of the restaurant. There are some nods to Christmas in the color scheme of green and red but it’s mixed with a lot of black so it does not stand out as much. 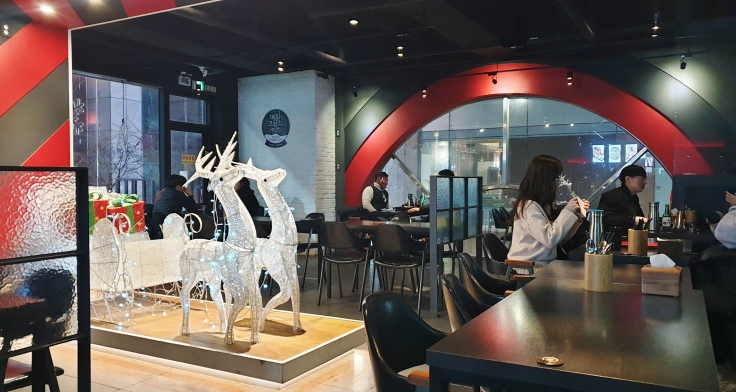 We also thought the chairs were are missed opportunity.  They could have been red or green rather than black and that could have helped to make it feel a bit more Christmas-like. However if they wanted to change the theme or sell the place in the future it would not be as hard with the current decor so perhaps they are just being cautious. 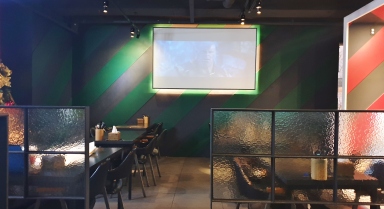 The name and the decor are the only thing Christmas about this place. The food and drinks are not themed. I felt like they could have at least had a couple of Christmas themed dishes or drinks. I mean if you want to sustain it throughout the year it really needs a bit more of a ‘wow’ factor.

They do have a rather extensive menu and it is quite cheap. So much so that we were a bit skeptical. However, overall what we tried wasn’t too bad. It was far from fine dining but most of it was well cooked and tasted good. This would be a great place for groups as you can get a lot of different dishes so everyone will be happy.

The other draw here is their unlimited cocktails. They have a set price of 13,900 won and you can get unlimited cocktails from their list. The only caveat is that everyone in your group has to order it. We were guessing that this policy is to stop people just sharing drinks so in that regards I do understand why they do it that way.

We ordered the drink special and between four of us ordered a range of drinks during the night including, Rum and Coke, Peach Crush, Blue Hawaiian, Gimlet and Black Russian and a few others I can’t remember. To be honest the quality of the alcohol was terrible. The rum and coke tasted like really bad cheap liquor; it didn’t have that nice rum flavor to it. The juice based cocktail drinks were better as the juice can hide the taste of the cheap liquor better.

I’m a picky drinker like I’m a picky eater. I prefer sweet drinks so Peach Crush is a staple here in Korea for me. Most bars will have it so it’s easy for me to order and it’s very low in alcohol so I won’t get drunk. The only thing is that most of the time it’s not sour enough which ruins the drink. I will say that this place does make a good Peach Crush so I was happy.

They have some table snacks which are delivered as soon as you sit down. These come in some cool cannon shaped serving dishes. They are long thin, crispy, pretzel type snacks covered with a good coating of oil and salt. They were good and disappeared extremely fast although they were perhaps a bit too oily.

For food we ordered a few different dishes. These were reasonably cheap so it definitely didn’t break the bank to get a few. They have a long menu and it includes a range of cheap appetizers at the start of the menu, then there are Korean dishes, meat platters and salads. I’ve included a slideshow with pictures of the menu below.

We ordered one Korean dish as one of the group was vegetarian. I think it was Jajang Tteokbokki and it was 6,900 won. It was a decent size dish and apparently was okay tasting. I didn’t have any as I’m not a big fan of most Korean foods. My friends said they liked it but they did think the tteok (rice cakes) were a bit overdone and the sauce was too thin.

Next up I ordered the smallest version of a meat platter to share. They had different scales of size that added extras the more you paid. This one was 13,900 won and came with a bread roll, a pork chop, a decent size piece of chicken (almost a half I think) and some pineapple and mushrooms on the side. I thought the meat was pretty decent I have to say. It was nothing fancy but was well cooked and tasted good. The bread roll was also not too sweet which is always a plus.

I also ordered the Chicken Salad to share so we could have some vegetables with our meal. This one was 9,900 won and my friend commented that it was like something you would get at a fast food place; she was probably right. However I actually liked it so I guess that just says something about my palate. It was just iceberg lettuce covered in dressing with some fried chicken pieces on it. The dressing was all over it and I was a bit worried about that because I don’t like a lot of sauces and dressings. I always forget to ask for them to put it on the side. This one was fine however, I don’t know what it is but I’ve had it at Paris Baguette before. I think it’s a mayonnaise with maybe some mustard mixed in. 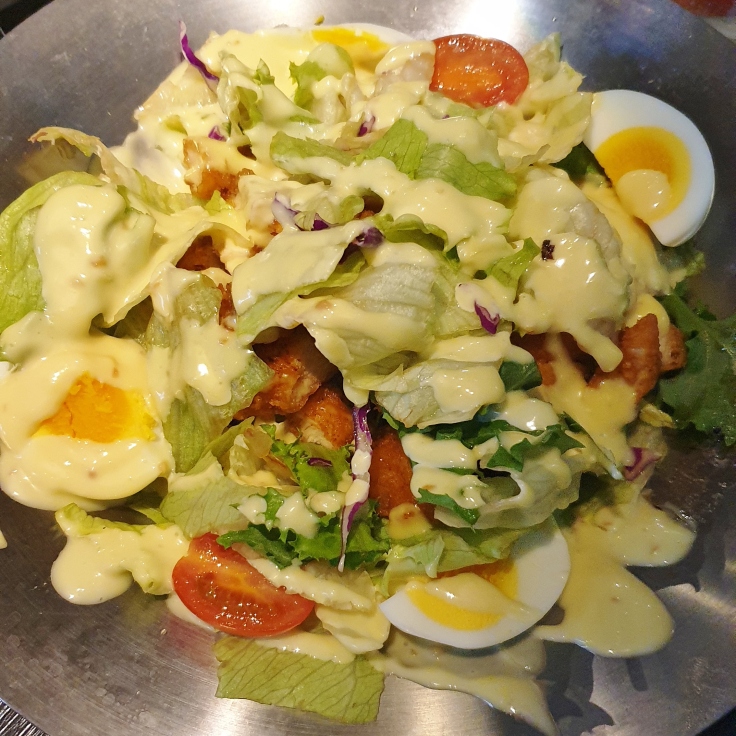 Lastly my friend ordered some salmon canapes off the cheap bites list at the front of the menu. This dish cost 7,900 won and it was a canape so obviously much smaller than the other things we ordered. You get six crackers which were apparently okay but there was not much salmon to be found on them. I guess for that price you can’t really complain too much.

The staff were nice and friendly; some of them seemed a bit new but as I mentioned this is a new restaurant so that makes sense. There were quite a few staff so we never had to wait for very long for service. I was out with mostly Korean friends and once the food came I had an issue with the meat platter. I just couldn’t eat it with the chopsticks because it was in big pieces. I’m not that good with chopsticks at the best of times but I can usually manage basic things without embarrassing myself too much. My friends asked the staff for a knife and fork for me. It took them a little while but they eventually came came back with some. My friends said they thought they may have gone next door and borrowed them from another restaurant which is why it took them so long.

Overall I liked this place and would go back. It’s not fine dining or anything but it’s cheap and cheerful. If you are stretched thin financially over the holidays but still want to go out and enjoy yourself then this might be a good place to hit up.