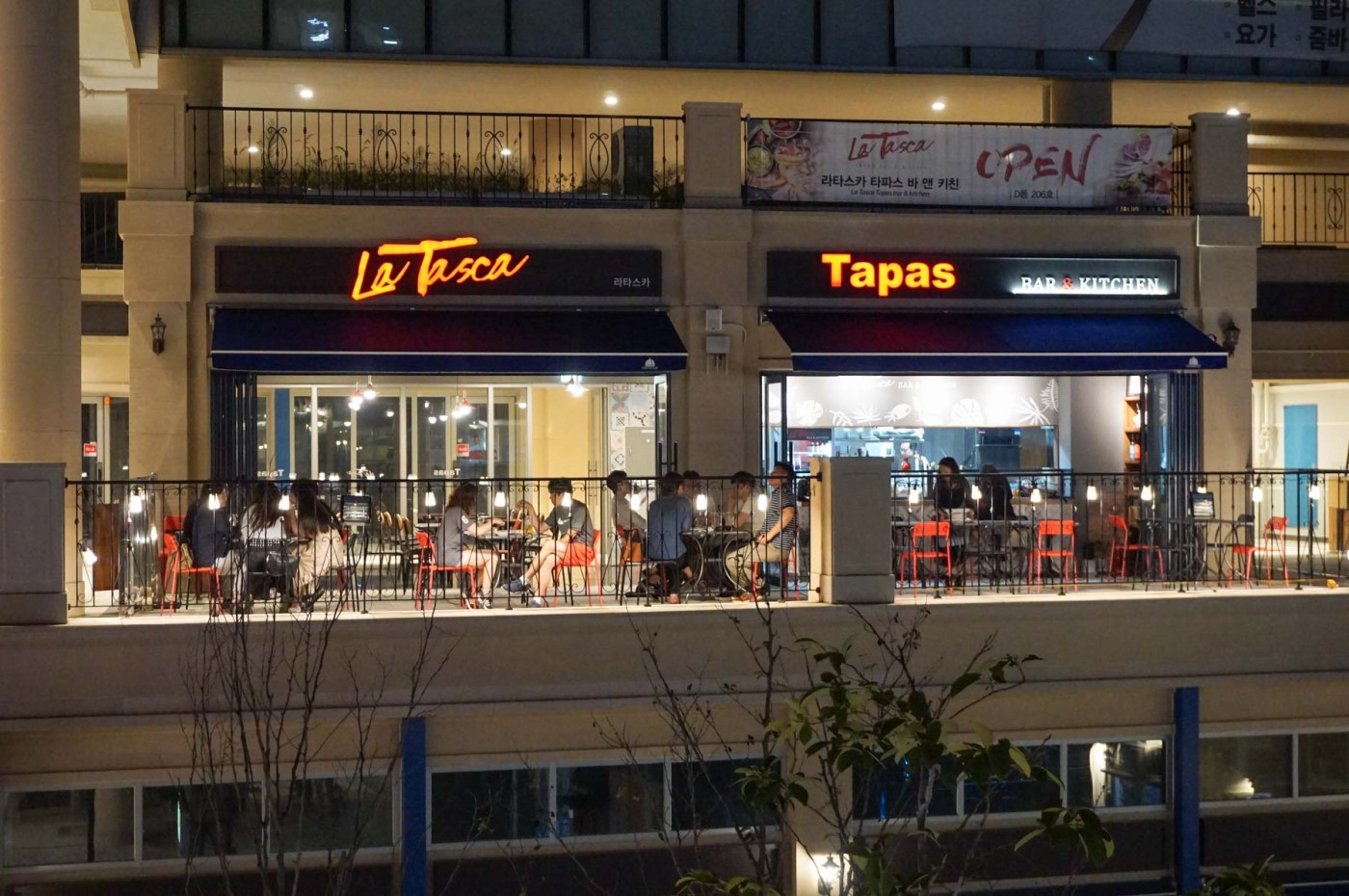 I’m a bit late in posting this as it was over a week ago that I visited La Tasca (라타스카). Unfortunately life gets in the way of blogging sometimes. However, I had my notes and photos and finally got some time this long weekend to sit down and write it out. 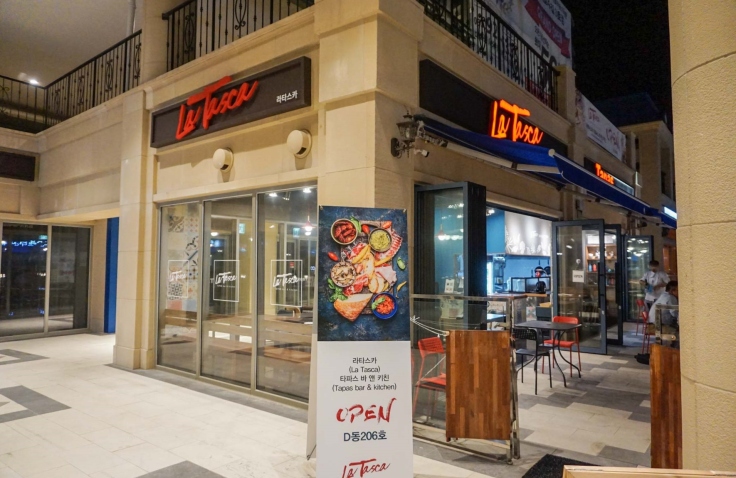 As I mentioned in a previous review I was recently in the One Mount area. They have a huge new complex in front of One Mount called ‘Goyang Garosugil‘. Most of the shop spaces are unoccupied at present but, there are a dozen or so restaurants and cafes that have already opened. 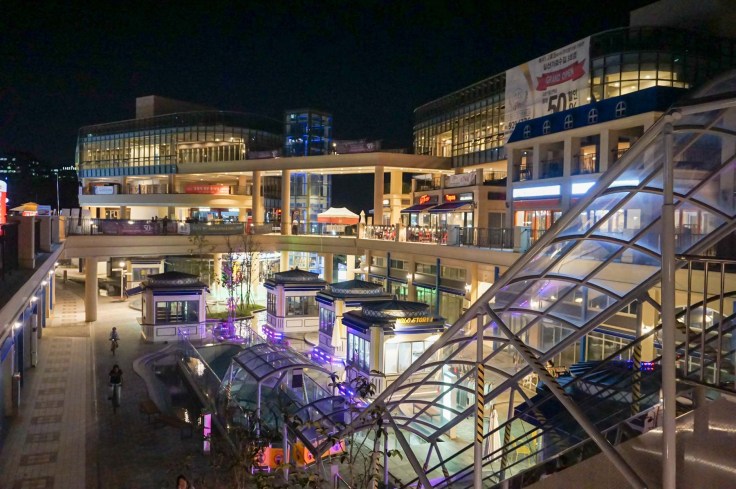 La Tasca is an appealing little restaurant located on the second floor of Goyang Garosugil. It’s at the end near the singing fountain in Lake Park. It has a great alfresco dining with seating both in and outside. The decor is fresh and clean with a bit of Mediterranean flair. It’s not a huge place but between the inside and outside they have about a dozen or so tables. 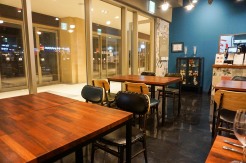 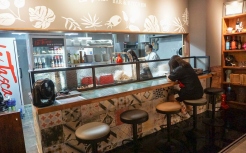 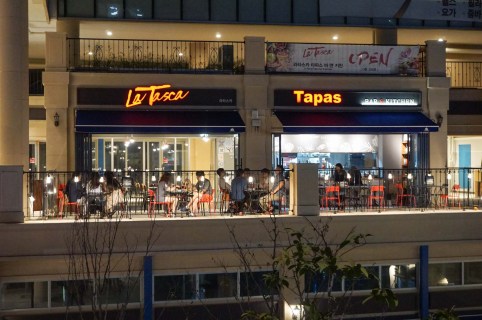 It was a really nice night when we went; not too hot or too cold. Many of the seats outside were occupied but there were a few free. We were going to sit outside but as I was taking photos the lighting was better inside. We were the only people to choose to sit inside. I didn’t really mind because the whole front is open anyway. We were sitting right next to the outdoor area just with better lighting. The restaurant also has a nice view of the blue turrets which are part of the main entrance and are designed to give Goyang Garousilgil a Mediterranean flair. 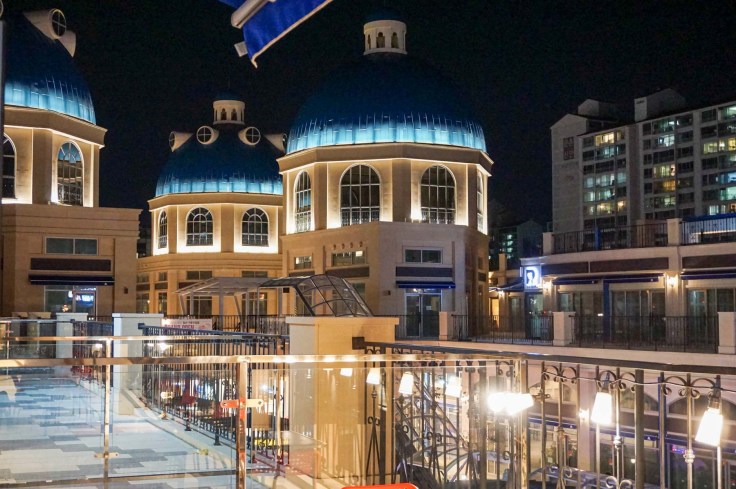 They have a comprehensive menu with pictures of all the dishes which I really like. It also had information on the types of dishes and anything else you might need to know. I’ve included a slideshow of the whole menu below. I’m one of those people who like to see the menu before I go to a restaurant so I always like to include them in my reviews if at all possible.

We got a range of different dishes to try. As it’s tapas they are all small dishes so it’s nice to get a variety of options. The menu has a lot of seafood (which I don’t eat) so my options were a little limited. I’m probably a minority on this however since seafood is very popular in Korea. I did know this beforehand because I had seen a lot of the dishes on Instagram.  I knew there were a few things I could eat so I was not worried.

When you arrive you seat yourself. They did bring over a menu as we sat down and explained the order procedure. You order and pay at the counter first. They will then bring your food and drinks out to your table. 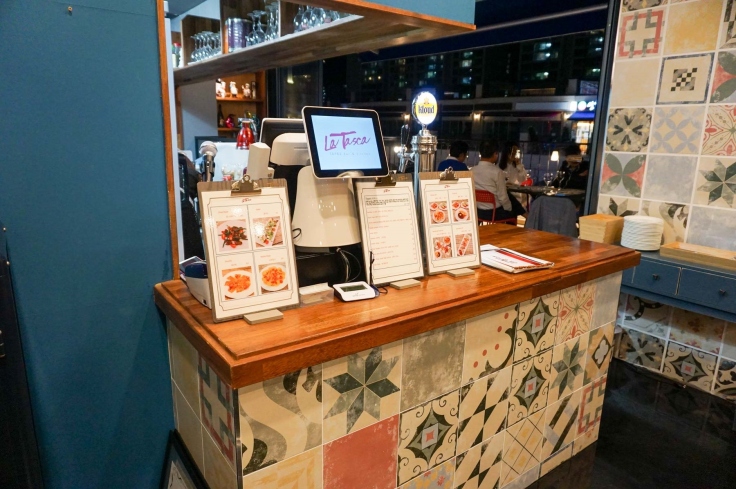 First off my friend got the Garlic Prawns and then we got the Chop Steak, Breaded Chicken Strips and a Meat & Cheese platter. To drink, my friend had a glass of Sangria and I just had a soda. The sangria was apparently average but not too sweet which she liked. My soda came in a can and they provided an glass with ice.

Most of the dishes were between 8 and 10,000 which I think is reasonable. However the Chop Steak was 20,000 which I think was a bit excessive for what you got. Overall the food was pretty good although my friend doubted the Spanish authenticity of most of it.

Of the one dish I did not eat my friend said her garlic prawns were nice but noted the garlic flavor was just on the outside and didn’t permeate into the meat. 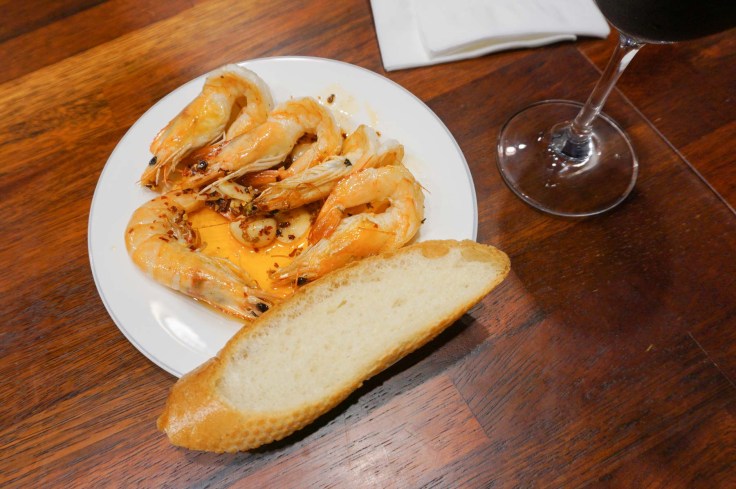 The chop steak was really delicious (but it was just bbq steak chopped up with tomatoes and beans). It all had a nice smokey taste and this was my favorite. My friend thought it was a overcooked as she likes hers very rare but it was fine for me and even a bit on the rare side as I like mine very well done. I’m sure you could ask them to cook it to your specifications. 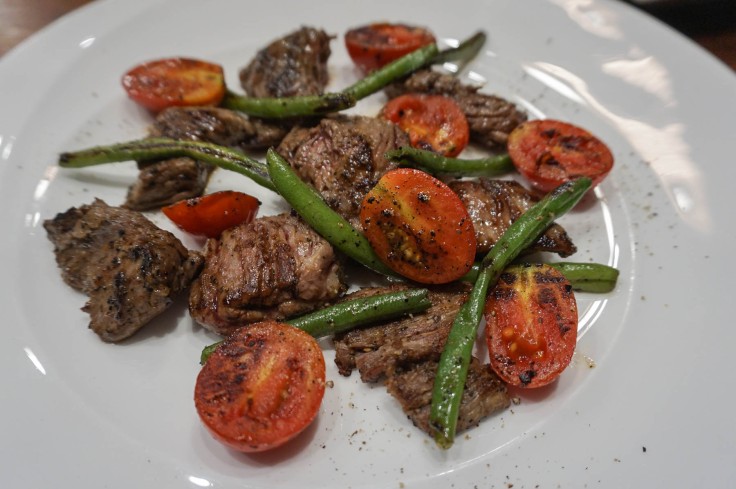 The meat & cheese platter was nothing special but not bad. It was very light on cheese, there were only a couple of small pieces of brie that seemed to be more decorative than anything else. We also had to order some extra bread as it did not come with any. 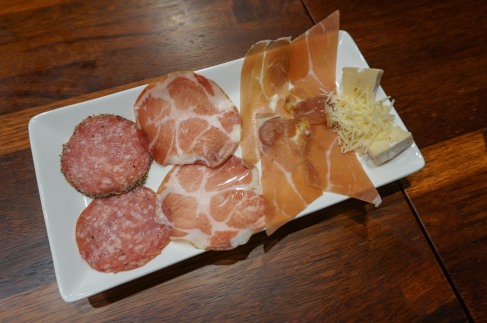 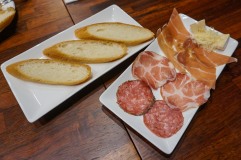 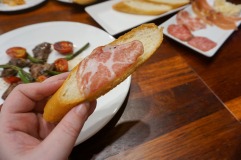 The chicken takes 30 minutes to cook and they warn you about that on the menu and when you order it. We didn’t mind the wait as we were not in any hurry.

Unfortunately when it did finally arrive was quite dry. It came with one sauce on the side. I think it was Thousand-Island or something like that which I didn’t care for. The chicken definitely needed a sauce and I feel like it is the type of dish that should come with a range of dipping sauces. The taste of the chicken was okay if a little bland. 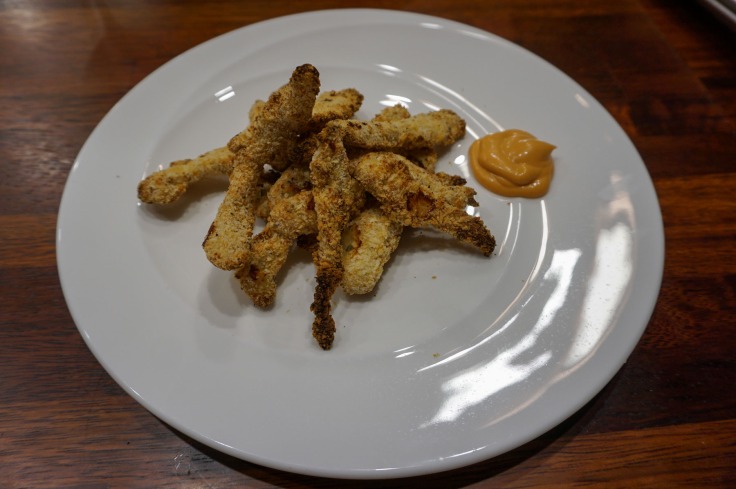 Overall I did enjoy myself. I think it’s a nice spot and its good to have something a bit different sometimes. I do think it would be best just for a light meal or some drinks and snacks. I wouldn’t go there for a full meal again but would for a light lunch perhaps.